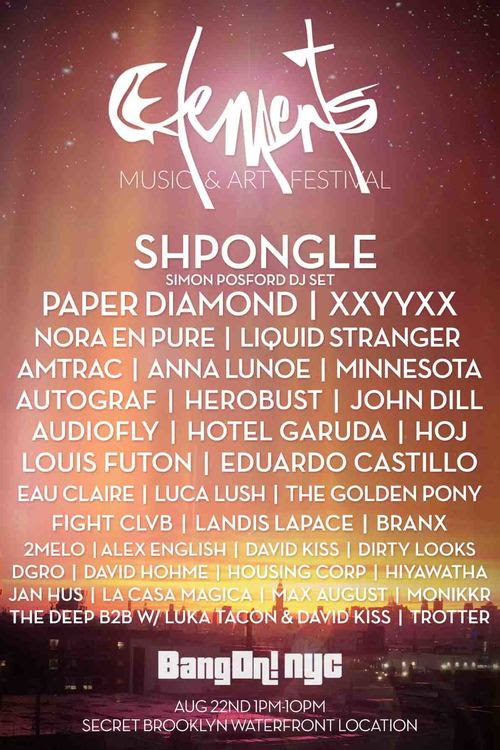 I never thought I’d be partying in Red Hook, much less at an unassuming venue such as this one. Who would have thought this massive waterfront hideaway across the street from Ikea would be such a cool spot. The music and action could be seen from blocks away as you approached. The venue was very well staffed and ease of entry was on point. We got in very quickly and began to explore. The industrial theme of the venue makes it feel super gritty but in a good way. The view of the Gowanus Bay was awesome both day and night. The ships docked in the yard only further added to the ambiance. 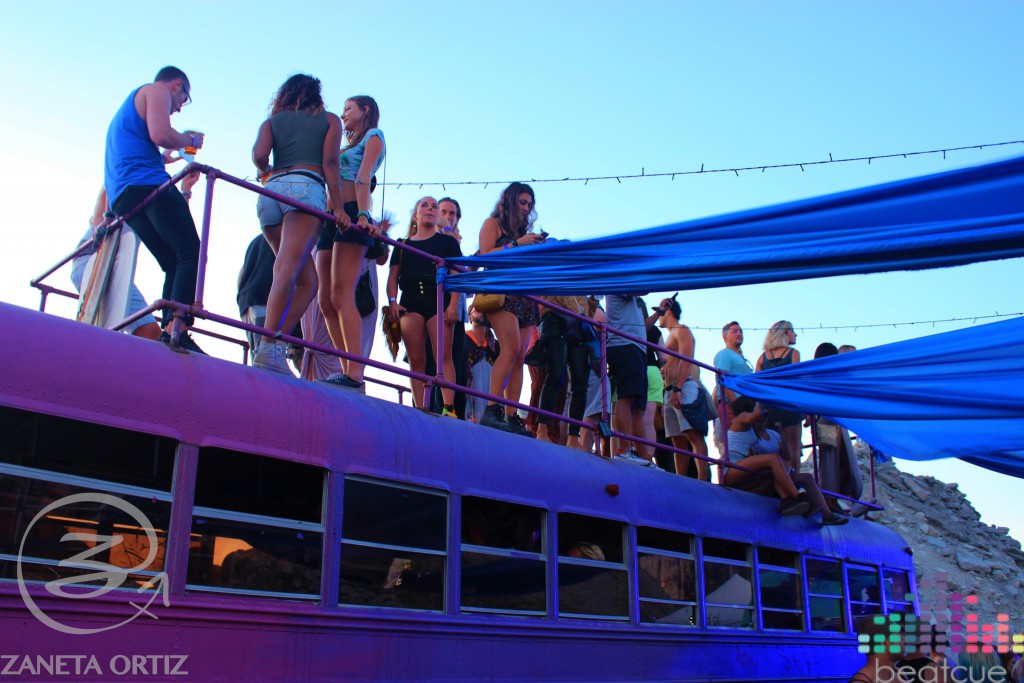 As soon as you walk in…instant vibes! The crowd was chill as fuck. Not only that but you know all those fun things that most other festivals seem to be banning as of late, well… BangOn! welcomed them with open arms. (No, it’s not what you think!) There were crazy costumes, paint, glow sticks and other bright flickering led toys like staff’s, and an abundance of hula hoops. Many of the festivals that restrict this kind of stuff really just take the fun out of everything. Why not just let everyone do their thing and have a good time right? 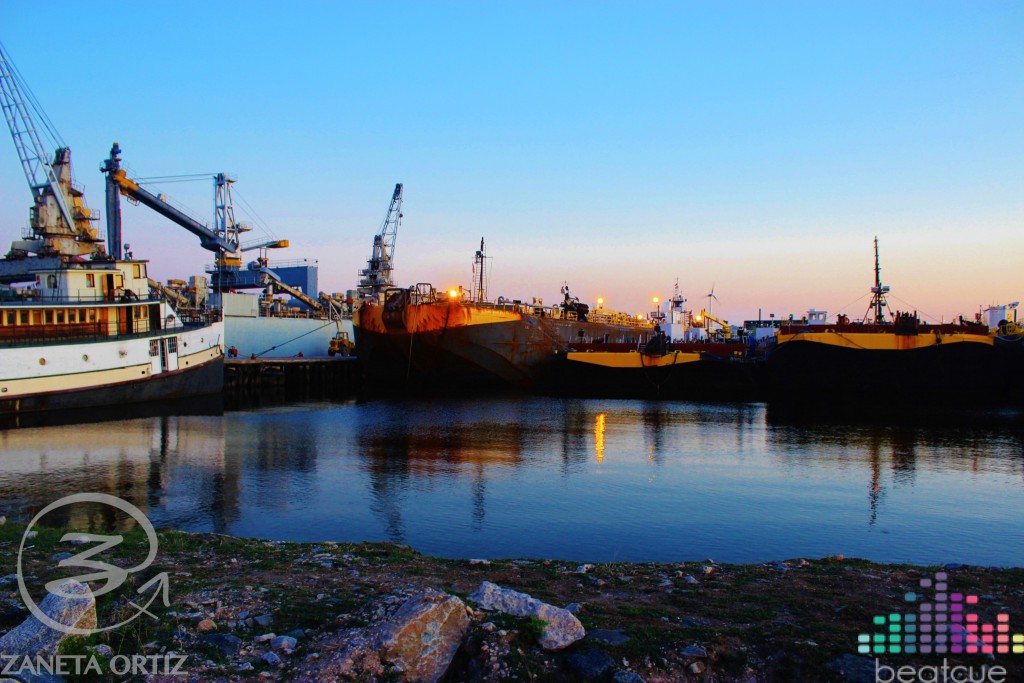 And there was definitely a good time to be had. I had heard about what BangOn! was doing a while back and now I am really kicking myself in the ass for not checking them out sooner. The set up was great and the music was on point. My favorite stages were Water, Air, Fire, well Earth was pretty dope too. Ah screw it, I can’t seem to decide. The Fire and Earth stages brought the most energy. The Fire stage played a lot of big hits and crowd pleasers. The Earth stage was playing some bass, Dubstep, and then when Sphongle took over he was playing some really trippy experimental shit but hey it’s Shpongle so that’s to be expected. The Fifth Element stage was banging out a little disco and towards the end of the night featured some live drums. They did a phenomenal job of setting up the booths strategically so that the sound of one area did not bleed into another. The water stage had more of a laid back groovy vibe and there were two party buses you could hang out in or climb to the top for a better view depending on how adventurous you were feeling. We hopped around from stage to stage depending on what was playing and we had no idea who was playing at the time and we didn’t even care. There was no constant checking of the lineup and schedules during our visit. It really brought me back to a time where people just went out, had no idea who the DJ was and just had a good time anyway. 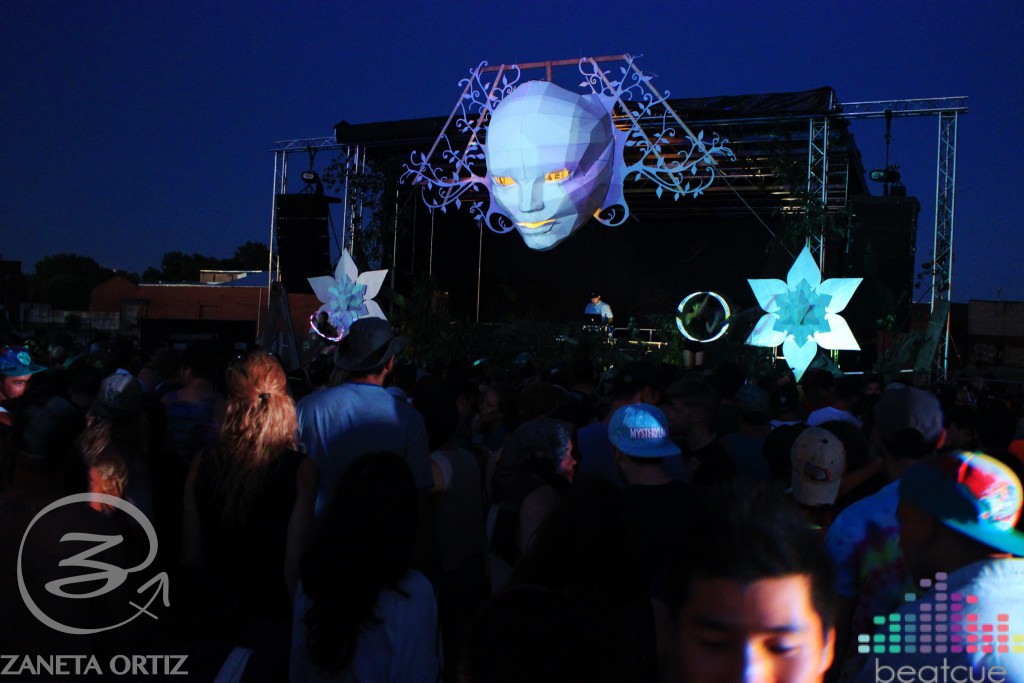 Imagine this, there’s literally eye candy everywhere. As you glanced up to the main industrial building on Columbia Street there was a trapeze dancer just skipping along doing spins and twirls. There’s sick visuals being projected onto the side and other parts of the building. Hula dancers on stage, light shows everywhere, there’s strobes beaming out from the fire stage. Just when you least expected it here comes a BMX bike roaring out of the top of the Fire stage at top speed onto a ramp. Now the Fire stage wasn’t given its name for nothing, there were of course fire performances as well. As artsy as this all may seem I didn’t see very much live on canvas painting going on or perhaps I missed it or was oblivious. I’d definitely love to see more of this at the next one. It’s really inspiring to observe someone’s creative process. 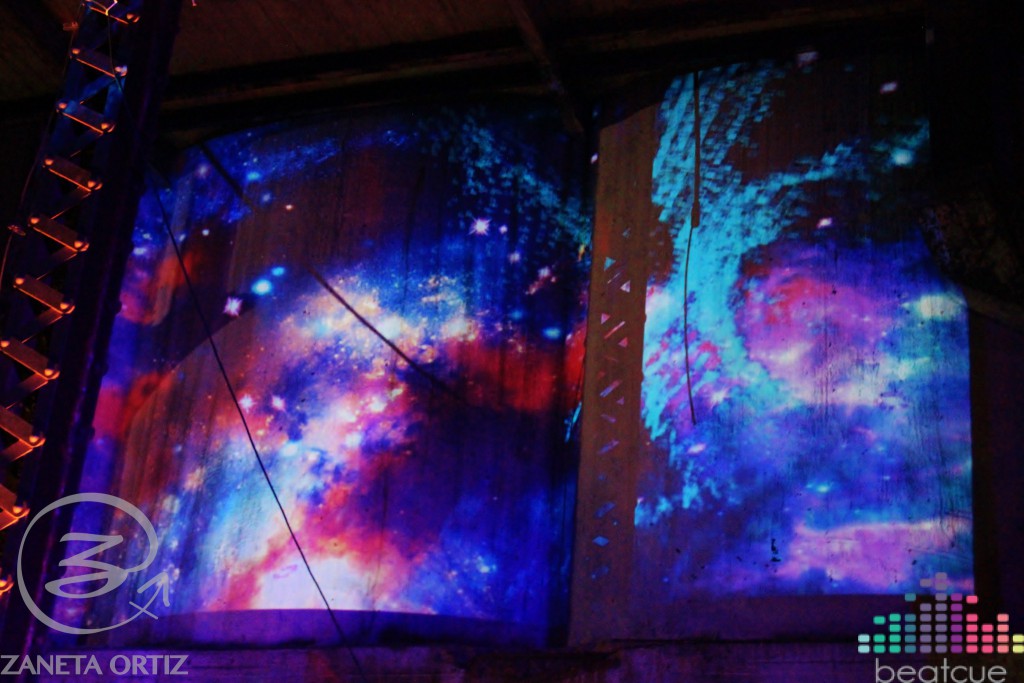 Other festival organizers should take note, how did BangOn! set this party up and have multiple well organized stages at a nine hour show and not rape our pockets. It’s evident that greed is not a factor here. They could have charged an arm and leg for people to get in but they didn’t. Ticket’s started at a very affordable $30 and went up to $60 in the third and final tier. They did all this all while managing to stay eco-friendly. Not only were the tickets super affordable but so were the drinks. The drink prices were about the average you would pay at a New York City nightclub, definitely not overinflated festival prices. There was a good selection of drinks too, they had Shock Top and Lime-a-rita’s just to name a few. Much thanks and props to them on that for sure! On top of that they had some great food vendors. Jamaican jerk chicken, what what!! The merchandise vendors also had some very cool and unique pieces ranging from clothing, to jewelry and other accessories. 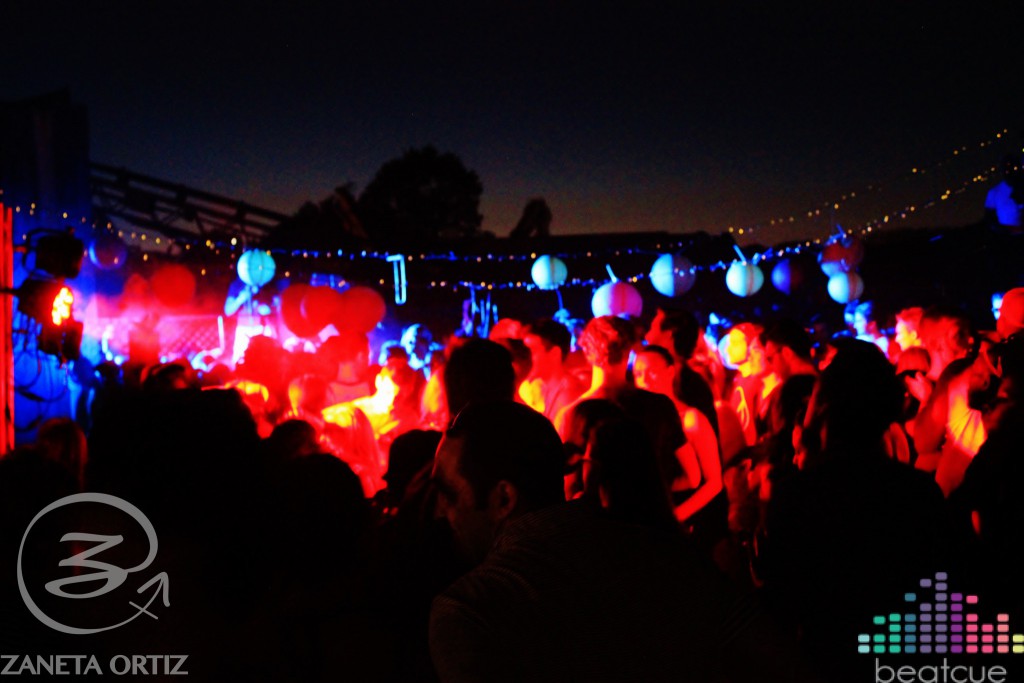 If you haven’t checked out this festival I highly recommend it. You should definitely plan to next year. If you do I have a few tips for the newcomers:

Bring something to sit on, the ground at this venue is mostly made up of concrete and gravel, you may find a spot on a wall or a rail somewhere but if you end up sitting on the floor you will definitely want something even if it’s just a hoodie or a throwaway t-shirt.

Don’t wear flip flops, especially if you plan to spend the entire day there. Sadly I’m guilty of making that mistake and after walking around for over five miles during the course of the day all my little piggy’s were going weeee weeee weeee haha. Not only will your feet end up super dirty but walking on the uneven pavement and gravel will start to take a toll on the soles of your feet. Boots or sneakers are your best bet, especially a pair you don’t mind getting a little dirty.

Bring tissues and promptly blow your nose upon exiting. While you may not realize it people kick up dust clouds off the ground while dancing and whether you notice it or not you are inhaling all of this dust. Another way is prevention by wearing something over your nose/mouth like a bandana but I wouldn’t say it was that extreme.

Wear sunblock, this should be a given especially if you have sensitive skin. With very little shade in this area you will be exposed for most of the day. It was also particular sunny on Saturday so skin protection is a good idea.

This last one applies to pretty much everywhere and anywhere, bring your smiles and positive attitudes. No one likes a party pooper! 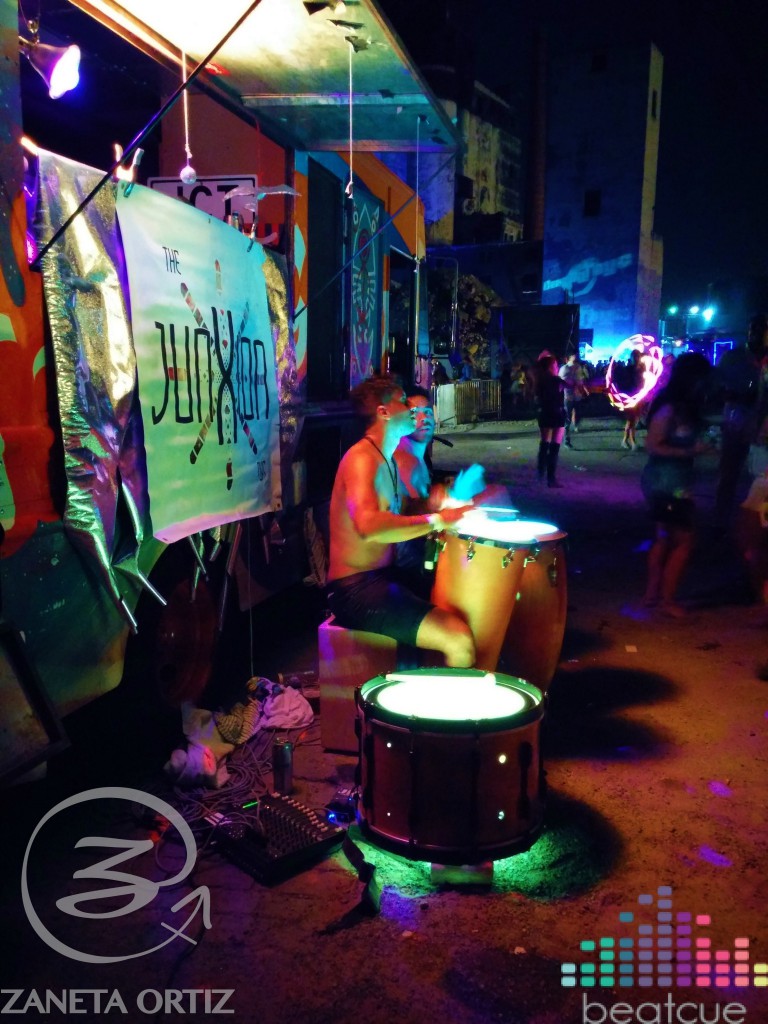 Thank you BangOn! for being a class act. I really must end this here, because I keep thinking of more and more I want to go back and write about but I think I’ve kept you long enough. Until the next one….. 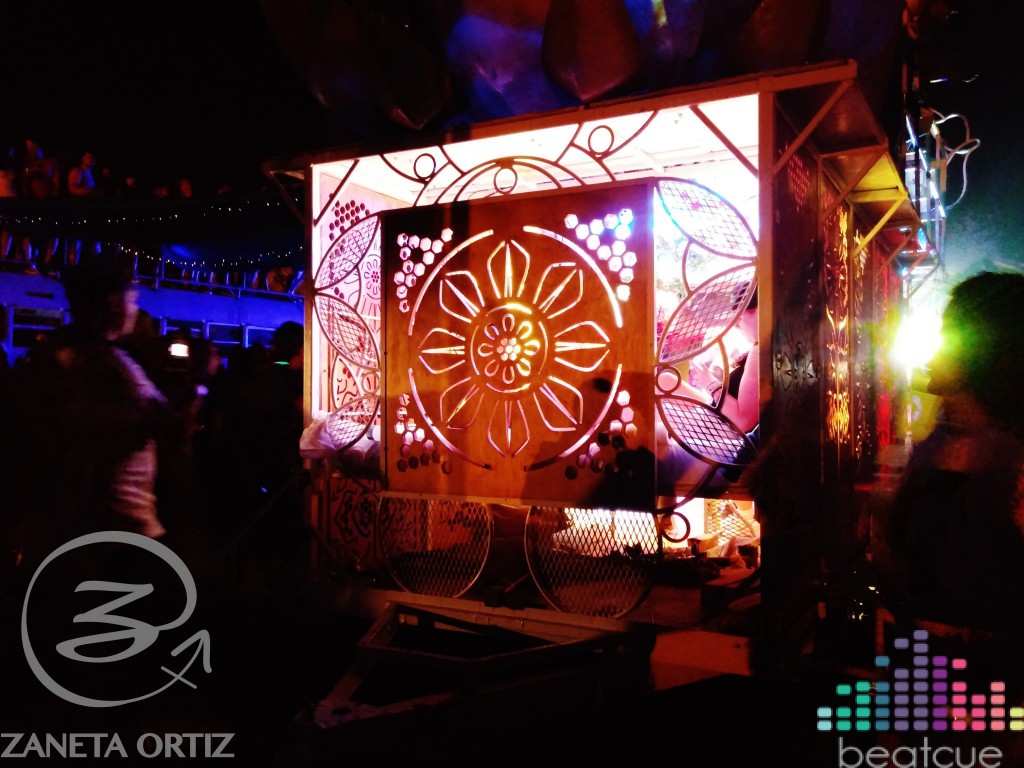 For More On BangOn!:

SLUMBER: Punky, Poppy Circus Theater at the House of Yes!